Guess who’s back? (Early) Handel opera on the main stage of the ROH! What was it, only about 10 years since last we had one of longtime London resident’s operas grace the acoustics of the main hall?

Nevermind, ROH has not only poshed up to high heavens – if it ever needed such a thing1 – but has hit a big win with those who have long known that staging Handel doesn’t have to be tedious. One didn’t have to look farther than ENO, who’s been running brilliant Handel productions for years. All you need to know is that this Kosky riotous fun is giving that “mamazing” Richard Jones Rodelinda I always rave about a run for its money. Clearly these two are the best Baroque opera directors of the moment.

Drop what you’re doing and go see it. If/when your local cinema shows it, get your ticket now. For those who like their mezzo power amped up, the Met is going to stage it ( See comments, it’s McVicar’s production from La Monnaie that is going to the Met. You should still see the Met broadcast, it’s a good team there as well) with the always suitable Kate Lindsey as Nerone2 and they’ll broadcast it. If there’s one Met broadcast you need to see, this is going to be it.

Kosky has already hit fabulous Handel heights with his Glyndebourne Saul, so this didn’t necessary come as a surprise. It was more what’s he going to do this time? Well, this is a very restrained production, both for him and for ROH. The focus is sharply on characterisation and character interaction, with a (current ROH favourite) rotating cube with various rooms as backdrop. Every character has their well defined personality and they interact like they’re supposed to, whilst at the same time use park and bark for our benefit (so that we can hear what they’re singing – big house, light voices = park and trill).

If you’ve seen Kosky comedies you know his humour ain’t subtle. Then again, neither were these particular Romans. But he’s good at what he does and even though it maybe cheap, it’s never stupid. The costumes range from really beautiful (for the women) to understandably blingy-ridiculous (Nerone) and midlife crisis-ridiculous (Claudio). 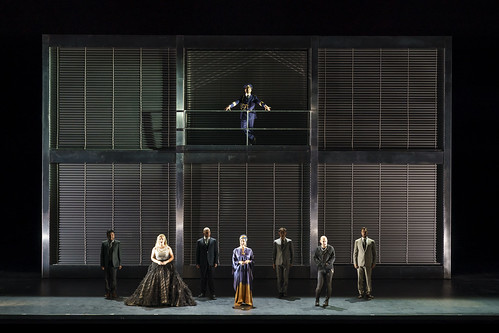 The singing is ROH level tops, with JDD and Crowe as big standouts and Davies in close pursuit. Fagioli’s diction is as garbled as ever (even from closer) but I think we’ve all agreed that this is what it is. Handel’s Nerone is definitely his role, though, and if you’re going to see him in a staged opera, I heartily suggest it’s this one. He can negotiate Come nube (aka, Come nembo from Il trionfo…) at proper pace and if you don’t mind super pressurised emission, you’re going to be happy with his rendition. Emelyanychev, of course, cradles him in a cocoon of sotto playing from Baroque-subtlety veterans Opera of the Age of Enlightenment.

JDD has always appealed to me in Baroque roles and Agrippina is no exception. She has the stage presence to carry the title role and her Pensieri and Ogni vento (with the fun improvs) were as good as anything. At this point in her career she’s mastered many styles and when you hear her in Baroque you don’t think Rossini, which is a very fine feat. So after a very stark Pensieri sung on a bare (and soul baring) stage, we had Ogni vento staged as the big moment of a consummate pop star (complete with sparkly microphone, poses, direct interaction with the public). It’s pretty trendy these days to give nods and/or poke fun at pop star moments but in the productions that I have seen it used it has worked. It fits here too, especially considering breaking the fourth wall is one of the pillars of this very self aware libretto. And it also makes sense Ogni vento (aka, whatever it takes) gets this treatment, because it’s Agrippina’s biggest moment of honesty for someone who’s genuinely dishonest.

After the Madrid Rodelinda, we know to expect good things from Lucy Crowe in Handel roles. And I’m pretty sure she loves this rep, because her enthusiasm at embracing Poppea’s many moods and scheming (complete with fabulous phrasing) was infectious. 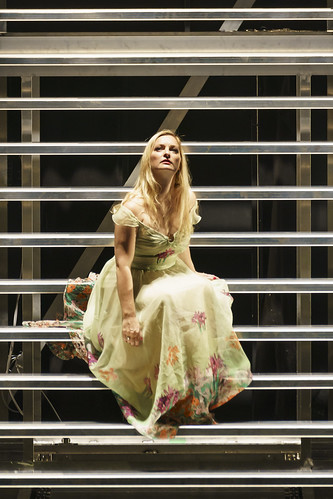 And, yes, T, S’agita in mezzo all’onde is called Vaghe perle here 😉 and is sung by the soprano. Let’s not forget Papa Handel was very young (24) and when he got this Venetian3 commission only a year after Aci, Galatea and Polifemo, so no wonder he immediately rushed to his stash of “greatest early hits” and plundered like there was no tomorrow (there probably wasn’t).

Incidentally, for those who may not know but read this blog, Aci & friends played at Wigmore Hall in very fine company the night of the ROH Agrippina premiere. Yours truly made the wise decision to attend that first (in very fine company, on, off stage and backstage). I also think that bit I really like from La resurezzione is also mixed in here. Though I may be wrong about this one… but it was written the previous year.

If you go to see one of the Nerone-related operas in the big UK houses, your chance at getting a Iestyn Davies Ottone are 99% or higher 😉 That being said, if we’re denied a contralto (as originally written for), he’s a very good alternative and was in top voice. Ottone, as ever, is parked in Lament City but he’s assigned that beautiful Crede l’uomo aria from Il trionfo del tempo e del disinganno.

So, like I was saying, Emelyanychev conducted, because this is ROH and if they’re going to have Baroque opera for their main course, they are wise enough to invite music people to match the poshness of their lobby. In other words ❤

He’s like the Currentzis for the discerning audience – all the subtlety of dynamics, none of the whiplash or boxing of singers in between two bouts of interpolated extraneous choruses. Orchestra of the Age of Enlightenment is always wonderful to hear, lucky us here in ye olde (soon to be ye lost in the Atlantic), but I have to say that I have never heard (really, NEVER) better period trumpet interventions. Wow. Whoever you are, you have absolutely ruled last night. Not to say that the oboes, strings or double basses weren’t great. Or, indeed, the fine cembalo playing from Maestro and Steven Devine. The whole sing rocked, the house was full and the laughs were genuine. Can we have more Baroque at ROH now?

PS: Emelyanychev’s cembalo is truly beautiful 🙂 I sat on the horseshoe and looked at it all night.