Boasting mostly the same cast, Ariadne returns to joyful reception in London after 15 short months. We’re all one year older and wiser (?). In the past year I’ve also become acquainted with Semele’s story, which adds to the comic angle of the plot (when Bacchus tells his life story). 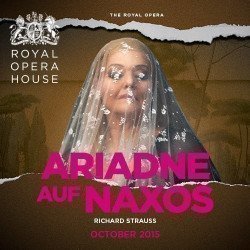 Every so often I comment negatively on fellow opera goers’ behaviour. This time the public has wowed me by showing great appreciation for the comedy, especially when the snarky quips from the vaudevillians turned into the Composer’s very serious moans. I think the conducting helped as well. I enjoyed the smooth transitions and the attention to detail, which brought out several instruments beautifully – for instance the oboe in Großmächtige Prinzessin.

The orchestra was mostly kept to chamber level, making the few bang! moments memorable. This allowed the singers to be expressive, such as in the case of Mattila’s wonderful phrasing of “you’re the captain of a dark ship ready to take me on a dark journey” in her duet with RDS’ Bacchus. I did believe Ariadne had developed a fascination with death (rather than a death wish).

This reminds me: the Composer, in his dialogue with Zerbinetta, is adamant that Ariadne dies at the end of his opera. But in the end it’s quite obvious (to me?) that she does not. So I wonder: is it because tossing the two world views together has influenced them both and the opera had, perhaps, taken on a life of her own? It is, after all, an opera that advises compromise and praises a sensible approach to life. Death can simply mean transformation.

One year later (and perhaps with all of us more relaxed), I liked both Mattila and Archibald better. Still not quite sold on JA’s tone but fearless (and ocassionally used to excellent comic effect) take on the coloratura fest as well as good acting through the evening. Last year I know I said I liked Mattila’s personality better than her voice but this time I must’ve been in a more receptive mood for her dark velvety tone. Now I think it’s an interesting sound, very appropriate for Ariadne the character.

I’ve enjoyed Donose’s Composer last year and did so again this year. It’s good to see things twice, as once the novelty of the production has cooled and it doesn’t capture so much of one’s attention you can focus on the most important thing: the singing. Although not the biggest fan of her tone, I have to admit that the woman can sing. The Composer is a tough role, very high for a mezzo, with a lot of angst in the top bit of the voice. It’s balm to the ear to hear a (properly timbred) mezzo who can extend there and be in perfect control.

Robert Dean Smith, whom I have not heard before, did a very good job with Bacchus. I preferred him by a good margin to last year’s Roberto Saccà. Less flashy in acting, he was an almost bashful Bacchus with a fluid tone, coping very well with the demands (Strauss not being too kind to tenors). He was also hilarious in the ugly wig the Tenor throws at the wigmaster.

The obligatory Strauss trio of ladies was reprised by last year’s ladies with similarly successful results. Listening to them I gave into fanciful thinking: how the (female) voice is like light – to enjoy its beauty best you want to separate it in three (ok, with light it’s more than three, but let’s keep the main idea in mind). Three voices together soar to heights of beauty one could not possibly encompass alone… or something along these lines 😉

There’s that strange business in the Ariadne-Bacchus conversation where Bacchus dwells on the fact that he did not succumb to Circe’s wiles. So Circe, the seductress, has not conquered… drinking? – whereas idealistic, “honest woman” Ariadne has. Bacchus likes the fact that she has sacrificed herself (gods like sacrifices), when obviously Circe did not have any of that in mind. Hardly a feminist take but yanno… beautifully sung and it’s perhaps disingenuous to over-analyse happy endings. It’s fair to say that Bacchus finds his meaning by saving Ariadne so they complete each other.

Lovely night at ROH – may this clever Loy production stay for a long time.