Indeed, this Jette Parker Young Artist showcase is built around Vlada Borovko’s Ermione (Oreste’s Bradamante-like wife). I saw her in the 2016 Summer JPYA performance and in a small role in Boris Godunov earlier this year but neither prepared me for her Baroque chops. Her voice feels very natural in this repertoire and more intimate setting. Should she want to continue down this route, I predict an intense Alcina in her future. The public loved her in any case. There was much to love. The voice filled the venue just right and it felt to me like her understanding of singing Baroque is spot on, coupled with a vocal texture that just works with what the music asks (thus able to express a lot of fine detail). To give you an idea, through the night I was reminded of Piau.

Davis (also seen in the 2016 Summer JPYA performance) as Ifigenia has a higher placed but more voluminous voice. Now it is true that Wilton’s acoustics are rather on the echoe-y side and that occasionally made it hard to gauge the finer points of what was being presented but I think she’s destined for a different repertoire and much bigger halls (Wilton’s capacity is a mere 300). Nontheless she was very committed. I was also quite on her side dramatically, she blended a few moods and traits in her Ifigenia’s personality that did not feel out of place. She had the most fans in the audience.

The original Oreste, Simkin, had to skip this performance due to illness (to read about her and about the performance on 9 November, check out Leander’s post). Instead we heard her cover, Australian countertenor Russell Harcourt, who had been involved in the JPYA program in 2007/2008. He has a very good grasp on coloratura and, though placed high, a pleasant to the ear voice. He could do with more body in the lower range. Dramatically, fitting the dystopia the production went for, he seemed to me like a deadringer for Unplugged in New York-era Kurt Cobain (+ dreads), complete with beige cardigan and barely held together general appearance. Any time he opened his mouth I thought he was going to break into Come As You Are. 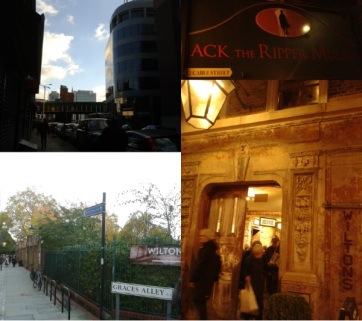 the area projects a very mixed vibe (click to enlarge)

If you’re wondering Wilton’s Music what? then you should know that London is littered with quaint venues and these venues are usually of such (small) size, simply inviting Baroque performances (which venues warrant a post of their own).

Initially I was whinging a bit about getting to Whitechapel, especially after Saturday, a detestable day of rainy doom. But yesterday (though rather cold) the sun was shining brilliantly so I forgot all about that, even though Whitechapel still throws me with its incomprehensible identity. Wilton’s (The City’s hidden stage) gradually won me over with its Grimebornesque air. There’s something very soothing/comfy about listening to Baroque in nonchalant settings.

As you can see above and below, Wilton’s sports that derelict chic outside and inside (very East London, the new, gentrified one). Likewise, the ceiling ornamentation is restored, although the ceiling per se is left with a just so feel of possibly dropping on your head during the next heavy rain.

I overheard somebody explaining that the production imagined a council estate setting. Perhaps, though that wasn’t my reading. The general idea I picked, of a doomed dictatorial regime on a wretched island, fit the libretto, and perhaps because the plot cuts rather close to contemporary reality (all foreigners shall be put to death), it was left more or less general.

By the end of act III the singers appeared to be adlib-ing (kinda like how they did (?) for the Fledermaus free for all at the JPYA Summer performance back in July). The vaguely ritualistic gestures from the beginning were left behind in favour of updated mannerisms (acting crazy, 21st century style).

Certain characters acted like they had taken the wrong turn on another opera/film set. Nagy’s Filotete seemed to channel an amorous version of Golum (my precious Ifigenia), which I think was the reason for the lack of applause (his singing was generally good, and his baritone very pleasant. My only eyebrow raising moment was him starting Bella sorge la speranza about two levels too forte for everything around him. However, by then – this being the end – everybody was likely tired and I could hardly say the ensemble was the high point of the evening).

Where most looked like they picked their clothes in Tesco’s Sleepwear aisle, Ermione landed on the island as if she’d just decided to step off her cruise boat and mingle with the natives (a sort of Elletra, to keep it in the family). By which I mean she wore a clean coat, tafetta dress, handbag, high heels and a relaxed attitude. Her arc was that much more surprising, I’ll tell you that much.

Speaking of which, between her and Ifigenia this production was driven by the women. I’m all for women not being shy to roll up their sleeves and do the job when needed but in this case I felt that left the men with precious little to do beside driving long lines of coloratura. That they did well.

In fact, at the end, Pilade had a very long aria of much complex coloratura (and little else) which felt like Handel slapping his head and going damn, I forgot to give the tenor (John Beard) much of anything to do. I’ll just have him sing the bravura aria with horns (modern here) at the end so he doesn’t desert me for the rival company. Atkins looked a bit deer in the headlights with concentration but I can’t complain about his delivery. His John Beard-ness (tone) is also of the good kind (Oronte = yes).

The only problem was that during these very long da capos, the others, who were almost constantly all on stage, didn’t have much to do beside occasionally mock the current singer (as per the production, I guess, and also in keeping with Baroque traditions. Another check for postmodernism).

When Ermione and Oreste sang that swoon-inducing duet Ah, mia cara, Toante stood close to them, watching. I felt like he was thinking you better blend well or I’ll cut you. The duet itself was pretty good, though here was the moment where Harcourt’s very light in the lower range voice didn’t provide quite the contrast to Borovko’s already on the smokier side soprano I am used to (you know the one I always pass out over; so good, just thinking about it makes me all verklempt). Perhaps to help him out, Hendry didn’t drive the orchestra particularly hard. So in the end it felt a bit light in heartbreak. The orchestra was just underneath me so I couldn’t see them at all, but I had a direct view of Fletcher, whose continuo playing was very tight throughout.

Aptly, after this came the intermission. But not before some brief instrumental music, the purpose of which eluded me. Shibambu’s Toante behaved like you’d expect a textbook tyrant to, with lots of hand signalling to his henchman (Filotete) and gleeful love for violence. Shibambu’s gorgeous bass tone didn’t have all that much use, as basses were kind of there in Handel’s time.

There was much-ish blood (of the wet kind, you know in some productions a character has just killed somebody and s/he touches a wall but nothing sticks; here it did) but then again, what else can you expect from that fucked up family?

All in all, an interesting afternoon in a cleverly picked location that helped the (mood of the) production at least as much as the musical team did. I like this ROH trend of giving its JPYA students the opportunity of a fully staged production and us an off the beaten track piece to see, may it continue (and may it feature more Baroque).

Half baked thoughts on pasticcio (should opera be *gasp* tasty?)

Looks tasty, I’ll have some (said the actress to the bishop).

It seems like pasticcios would be right up our alley, what with the many layers and the possibility of using whatever’s left in the fridge… I mean mixing and remixing etc.

Mash-ups are right up my alley, that’s for sure. I love the idea of repositioning given pieces and coming up with something slightly (or more than slightly) different. So in preparation of Catone in Utica, I’ve been thinking about them, helped by talk on other blogs as well.

But it was soon brought to my attention that there are some out there who take a dim view of pasticcios (and possibly pasta dishes in general). It could be argued that, had the Met put up more Baroque opera productions before they did The Enchanted Island, people would’ve been more relaxed about it.

You might be asking yourself why all of a sudden The Enchanted Island, which premiered more than three years ago? Have you been reading old news again, dehggi? Nope, not this time. I saw that pasticcio on Sky Arts back in 2012 and enjoyed it, though I’d’ve rather had a (shock, horror) mezzo or a countertenor sing all the fun arias DeNiese didn’t quite have the chops for.

I did, though, read about The Indian Queen currently over at the ENO, which I did not go to see, forewarned by a mysterious gut-feeling (or maybe it was just gas). I was very amused by Leander’s reaction to it, read her lowdown and then clicked on her link to the Classical Iconoclast’s blog to see what he thought about it. END_OF_DOCUMENT_TOKEN_TO_BE_REPLACED