Elbphilharmonie, this will jumble your sails 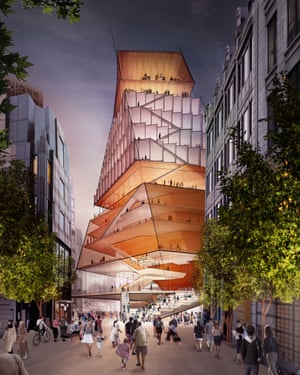 it looks sort of similar…

The new, state of the art London music venue is coming to a roundabout near… well, not you, probably. Near the City of London, which is not the same as London. You know those intersecting circles? It’s that kind of a thing here. Or London > the City of London.

The City of London is that ugly bit in East London (as opposed to the beautiful bits of East London… err, anyway!) most famous around here for the Barbican. There is a roundabout there with a subway (as in: underground passageway) and a bunch of skyscrapers squeezed in for that special NYC Financial District feel, because, well, it is the financial heart of London. An ideal spot for a swanky music venue, don’t you agree? That’s exactly where they want to build it (you really want to see the roundabout).

The concept includes a pedestrian plaza and foyer above which would sit an “acoustically perfect” 2,000-seat concert hall for the London Symphony Orchestra (LSO). (from The Guardian, see link at top)

Rising further would be four floors of commercial space

Yay, commercialism sitting on top of music! Grinding it down?

I’m not posh enough to know what that means. Swanky, in any case.

at the top, a more intimate venue for jazz and other performances

Diller [the architect] said the wooden concert hall, in which the audience would wrap around the orchestra, was inspired by geological formations of layered strata. It would be quite steep so every seat in the house would have a good view. There would also be breakout areas for musicians to perform within the audience.

OK, pretty much like all modern music venues. Breakout areas = that sounds rather ominous = the soprano broke ranks! Catch her if you can. Haha. But if the acoustics is perfect, you can hear her from every position. Or they’ll have to spin around like at Elbie?

Where the money comes from remains to be seen. “We are working with a number of major, potential donors,” said Kathryn McDowell, the LSO’s managing director. “We are in the early stages but we are making good progress.”

Evil money, as usual, thus furthering the idea that classical music = for the rich, because probably quite rightly the public would bulk at £288m being taken from the public purse for a musical venue in a city that already has several.

The £288m figure is a large one, although much less than Hamburg’s magnificent Elbphilharmonie, which opened two years ago. It was originally estimated at €450m (£395m) and ended up costing €866m, most of it public money. Jean Nouvel’s publicly funded concert hall in Paris came in at €390m, three times over budget.

Sir Nicholas Kenyon, the managing director of the Barbican, pointed to the success of both concert halls in creating new demand for music.

I know the adage “build and they will come”, though I’m never quite sure how it applies here, other than how it applied to Elbie = all star superstar concerts of see and be seen public vs interesting music programming.

She [the architect] admitted that the location, in the middle of a busy city of London roundabout, was not the most dignified spot for a landmark building. “It is quite a moat.”

But she said it provided huge potential and would bring a southern entrance to the Barbican site which was “transparent, porous and welcoming. Basically everything that the north entrance is not.”

Heh, at least she’s admitting to the ugliness of the Barbican.

There you go, apparently something to look forward to after Brexit. Sort of.