Vivaldi, Darius and the Shroud of Turin

It’s official, thadieu and I have our tickets for the very silly L’incoronazione di Dario at Torino’s Teatro Regio, where we’ll see this badarse cast under Dantone’s (who else? He loves this one) baton:

So we know the contraltos but what of the baritone? He was also in the original recording as well as at Festival de Beaune:

And here’s Sr Novaro singing not Vivaldi but spinning rather well on that horse statue:

Whilst scratching my no so cosmopolitan head regarding things to do in Torino other than watching contraltos and friends, a buddy reminded me of the famous shroud. 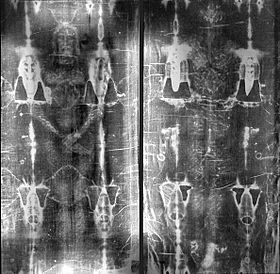 Jesus in the shroud, posing suspiciously like a medieval knight would

Why of course! Who wouldn’t want to see that? Except, upon investigation, it turns out that it’s not that often on display. 9/10 times you’re likely to see a copy. Which means you see a copy of a… fantasy. About right for the post truth era 😉 Though we hope all the above musicians show up in old skool real fashion.