Der Rosenkavalier at its most lyrical and tame (ROH, 11 January 2017) 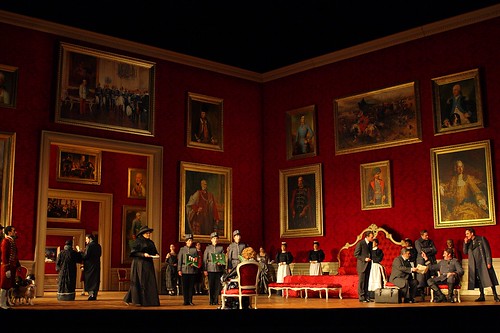 I’m often not on board with critics but this time I found myself ditto-ing the entire Clements review for the Guardian back in December (which I read today, so as not to influence my opinion). If you haven’t done so, you can read it here as I’m not going to go over all that since I agree. I’m not sure I have seen a Carsen production live before but this re-tweaked Salzburg one certainly hasn’t made me a fan.

There isn’t – at least in this ROH incarnation – anything wrong with it; it rather reminds me of the current ROH Traviata (also associated with Fleming): goodlooking, lavish and little else. Also as here Act III happens in a brothel, the insistent hammering of “young love is so cute” in the coda (Sophie and Octavian’s duettino is reprised for our pleasure… and because they’re cute, innit) falls flat to me. Then again, maybe I’m a prude and brothels are really romantic. Maybe I just don’t get the deeper meaning but the way the production unfolded I didn’t feel intellectually stimulated to look for one.

On the very bright side I came away with a heightened appreciation for Andris Nelsons. His handling of the ROH forces – with special attention to details (the sprightly, buoyant brass in the overture, ideally evocative of the unencumbered cheerfulness of youth, the excellent interventions of the winds throughout) – and a much welcome Mozart filter through which he saw this Strauss score was close to a revelation for me. Light footed but with energy and body – I really liked hearing it this way! The ROH Orchestra felt fresher than ever. There were some moments, though, when I questioned the slowness/languidity of the tempi. But I was in a funny mood.

As ‘Rosenkavalier keen followers might remember, two years ago Coote spoke out for Tara Erraught when the Octavian media debacle happened around the Glyndebourne production. One thing is for sure: the costume department has learned the lesson taught by Glyndebourne. All Coote’s costumes, though not lavish, were studiously fitting. Good job ROH costume department! Keep up the excellent trouser role work!

That being established, through the evening I kept thinking about the 2014 Glyndebourne ‘Rosenkavalier production. For all its faults, that one had fizz and I feel it truly understood the spirit of farce so evident in the libretto. This one was overly lyrical and the comedy strangely demure. I wish we had that production with this conducting/orchestra work.

Though I like Strauss, the opera and Coote, the biggest attraction this time was Fleming in a Strauss role in which she has been very successful. I also considered that she isn’t so young anymore and we might not catch many chances to see her in full productions in the future.

My conclusion was manifold. As you know big diva sopranos aren’t my number one pull towards opera, thus I approached Fleming as someone rather exotic. There is indeed a diva air about her – the fur, the silk and, of course, she was bedazzling in jewellery for the grand finale (I genuinely can’t remember a time when I saw someone sparklier on a stage) – but it didn’t eclipse all around her.

The voice is quite obviously in decline – and frankly I don’t know if it’s a voice I would’ve liked at the best of times – with quite acidic edges at the top. Most would agree she has never been a natural on stage, though she certainly has learned to walk across it without fear and with enough classic elegance as to hold an audience’s attention – at least in a role like this. It seemed to me like a woman who has quantified her strengths very realistically and built a career on this realistic assessment.

She also proved her undeniable Strauss qualities to me. Where it counts – in Marschallin’s long Act I monologue – her musicality and vocal control (the famous Fleming portamento, various dynamics) was truly top notch and fleshed out the beautiful voice-orchestra (oboe, flute etc.) dialogue Strauss has written. I thought to myself I can see/hear why she has excelled in Strauss, the voice and her musical temper is made for it. If there is one thing I’m taking with me from having heard Fleming live is this.

The monologue, though, infused the mood of the night to such a degree – and I’m not entirely sure how much of this is it being a vehicle for Fleming, or just the production in itself, or Nelsons’ fault of judgment, or my mood because I’m closing in on a certain age these days and might subcosciously want to stop the clocks too – that it really put a damper of the comedy. Without the score being conducted in a too Wagnerian manner – far from it – maybe perhaps due to an occasionally overly lingering languidity I actually dozed off at the end of Act II and almost fell face first into the bald spot of the chap in the row below. 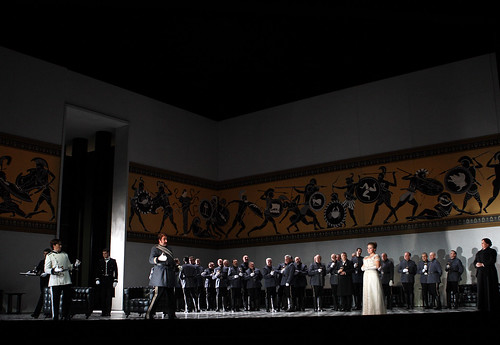 Sacrilege! Act II is both sweet and funny and Rose as Ochs was very interesting of voice and campy-buffoon rather than uncooth. But one expects Ochs to be boorish rather than just ridiculous. I couldn’t see the country cousin in Rose, as much as I enjoy(ed) his gorgeous bass tone. I’m trying not to be closed minded and as such I’m not saying this winky-campy take was wrong per se. In a sense, with the Marschallin lacking any hint of desperation (she’s just lyrically musing about the passage of time with Octavian as a cute accessory) and Octavian coming off as a completely benign young man, this polished Ochs made sense. The production, too, is clean enough to accomodate a good chap (albeit lecherous) type of cousin.

I still dozed off.

Coote, as a perfectly tame boytoy, drew the few laughs of the night – as she should’ve. I don’t think it was her fault as much as the general mood I mentioned above and what the production gave her to work with. Any Octavian to Fleming’s Marschallin is going to be less of the zany, fart joke type. You’re actually a bit surprised he would consider cross dressing – and in this case that – the fact he genuinely enjoys pulling this erotically charged prank, whilst his ex-lover is dining with the ancient uncle Greifenklau – springs out more than ever and makes you think he is right to move on. I thought Fleming and Coote’s chemistry was good enough, but it felt like Octavian came to life less in her company than when he was caught up in his schemes of deceiving Ochs. Now this might be just it but usually my focus is on wishing for him to return to Die Marschallin in a fictitious Act IV. Though I don’t buy the brothel-located young love, this time I was convinced that Octavian and Sophie had a future together.

Vocally I was surprised how well Coote projected. Her voice has always had good heft but I have only heard her in much lighter fare so far. Her top notes are solid and not bad at all. So though I think I may like a brighter tone (or possibly more colourful, but I always like extra colours) for Octavian I had no problems. Now we shall see how Vitellia comes off later this year.

Bevan was Sophie. She’s making quite a career here in London and I myself have seen her in a number of roles but, sort of like with Lucy Crowe, I don’t feel her very much, without being dead set against her. I normally enjoy a more “bell-like” tone in this role, with some semblance of innocence. Lacking that, she pulled off very well the bits where Sophie tells Octavian how she would stand her ground and bitchslap anybody who “dissed” her and also in Act III where she tells Ochs to stuff his marriage certificate where the sun don’t shine. 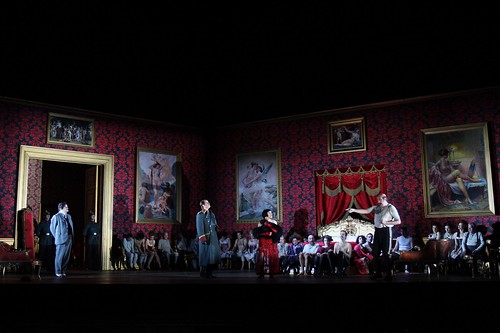 Supporting this production’s bent for elegance, the Italian Singer was (way) less awful than usual. David Junghoon Kim did a very smooth job in fact, possibly because he had the chance to step in for an indisposed Giorgio Berrugi. Well, good job, mister, in that case we can allow you to wow us with your chops for sacharine Italian tunes. He also lucked out when the Italian Singer was allowed to reprise his aria as a move on the director’s part – I imagine – to add even more pizazz to Marschallin’s morning audience, when the Italian Singer sees the Milliner’s beautiful models parading in front of Die Marschallin (really pretty dresses – the costume department did an ace job all around).

Much like Domingo, Fleming still pulls and this being a firm canon opera the hall was packed to the gills even this far into the run. The atmosphere was rather congenial, though in our tight quarters (aka, Upper Amphi) a fight almost broke out between over ’50s regarding knees touching shoulders once too often. I also had a revelation about the rather special self definition of class in this country whilst rushing (as ever) for my seat. What better opera to hammer home class distinctions?