← Lava fizzy or the misheard lyrics of Akhnaten
Ariodante in the swamp (London Handel Fest, 12 March 2016) →

The brown and gold sands of time dissipate to uncover the shadows of Egyptian dieties slowly twisting into 3D from their customary flat positions. Plastic screen-doors on the bottom tier of the stage half conceal the shrouded body of the late pharao. I like that, plastic + mummy. It is traditional but not completely. People in white coats fuss with the body. It feels like a lost X-Files episode.

Last night was my second time seeing Akhnaten live. I liked it more than the first time. The fact that I’ve been obsessively listening to it for the past week might have something to do with it. But perhaps that’s how this one works, it slowly insinuates itself into your awareness (like this).

The 15 March performance will be recorded for BBC3. One hopes there will be a DVD as well? It’s not like the market is crawling with Akhnaten productions.

My interest in the last installment of Glass’s trilogy can be traced back via this blog, the biggest success to date of my Thursday’s Something Else series (on first hearing it I called it “soothing classical music” 😉 ). It’s been a slow burner indeed but constantly at the back of my mind. No wonder people use terms like “mesmerising”. The more you dig, the more there is to discover. As usual, nothing focuses your attention more than a live performance (or two). Perhaps it’s because I’m very visual, but I focus better if I actually see what’s happening. Even watching the bow pulsate over strings makes it all more enjoyable. The cello features heavily and it was a pleasure to watch and listen, as was the brass section, the winds (especially the prominent flute(s) and bass clarinet (ftw!)) and the various percussion – epecially this one.

For this special event I chanced on the £20 “secret seat” twice. I’m so satisfied with my luck that I highly recommend the secret seat scheme. Both seats were in the Dress Circle, the first in row D and the second in row A (no heads in front! and awesome view of the orchestra – did you know Maestra sings along with the chorus?). 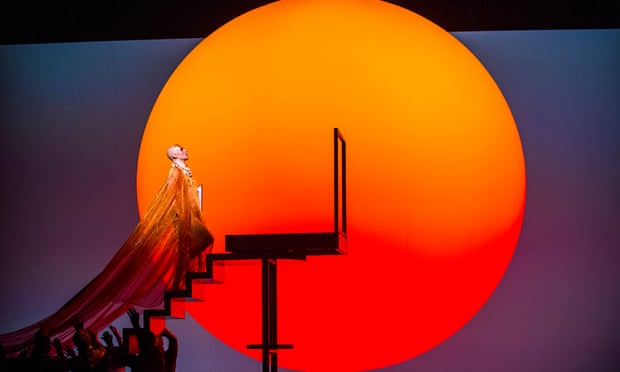 Also because it was so special (ENO had last mounted it in 1985) I bought a programme and from it I learned that Hymn to the Sun is a chaconne, Glass making a point of referencing Baroque style writing. The cello obligato part is indeed a thing of beauty. I’m still not sold on the vocal part. It wasn’t helped by the fact that ARC was – here and there – inaudible. Not quite sure what was going on but I don’t remember it from last time. Who knows, memory is very selective. To be fair to him, he soared when called for in his duets/trios with his ladies.

Friday, though, I was under the Balcony overhang which I more or less blamed for whatever was inaudible (mainly bass Clive Bayley as Aye, Nefertiti’s father; barely heard again, kind of annoying, as his part is rather interesting judging by this). Funny thing: this time around the jugglers dropped some of their balls/candles – something else I didn’t remember happening on Friday.

Choreography. The subject matter asks for the opposite kind of acting than what you normally hope for in opera. Namely, not naturalistic. It really feels more like dance than “acting” – underwater dancing, at that. But it works and it adds immensely to the hypnotic nature of the music. I thought Rebecca Bottone as Queen (Mum) Tye had the best knack for this. She looked right at home and (emotionally) moving to boot. She also gets points for great pitch (and ping and stamina) in the insane vocalise during The Temple, when Akhnaten and Tye banish the cult of Amon. In another hark back to Baroque tropes we get ha-ha-ha-has that are actual hahahahas (it feels like they are laughing at the High Priest). Gotta love ’em. Here they came off a lot more comical than in the Stuttgart recording – and what with the jugglers, even playful – so great job all.

Contrasts. It is, I think, unusual in the DVD age to discover an opera via an audio recording. But since this is not a frequently staged opera, I, like most other people, am mainly acquainted with the 1984 Stuttgart version. I enjoyed the Stuttgart Scribe better in the opening recit (Open are the double doors of the horizon, unlocked are its bolts1) because I felt the mythical mood needed a remote, monotonous presentation. But I liked the ENO Scribe (bass Zachary James) better in the recit preceeding The City, the scene that depicts the building of Akhnaten’s new capital, where his lively, theatrical rendition fits the buzz and excitment of the new.

This brings me back to the acting in Hymn to the Sun. I said last time that ARC did not possess the kind of charisma needed to carry this pivotal moment. Well, on seeing it again I think the fault isn’t entirely his (plus he did very well in the comical/violent Temple2 scene). It is true that he has a very ethereal presence – which fits the rest of the performance – but the personnenregie did not help him out here. Along with the two different ways I feel the Scribe should act, I am now convinced that we need both approaches for Akhnaten as well. There are plenty moments of contrast in this opera so I’m sure a production will one day successfully incorporate both. 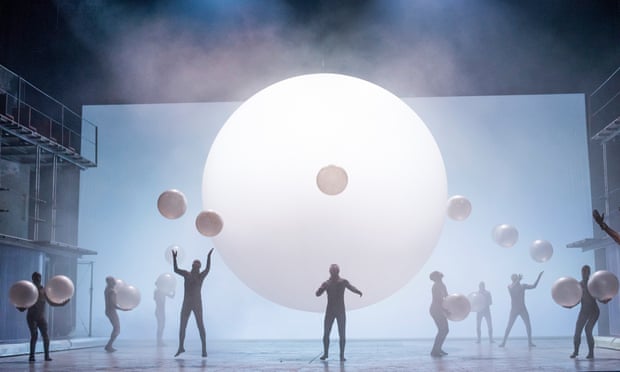 Jugglers. We had jugglers, who very subtly introduced and carried to the end the ball motif. They started innocuous enough from the getgo, as if humbly providing a bit of pizzazz during the ceremonies. Only later – when they juggle them around the newly crowned Akhnaten – it turns out that their balls are foreshadowing the greatest ball (of fire). Astute detail, as I understand Amenhotep III had already planted the seeds of a revolt against a too powerful clergy. Another neat trick is how they intentionally drop the balls when Akhnaten is attacked and killed. It’s all very simple but it looks great. In the Epilogue, where we have the ghosts of the past the jugglers return pushing the balls on the ground, recalling dung beetles (and tumbleweed). But speaking of the Epilogue, I wonder why Akhnaten and the ladies appear in the afterlife dressed as their pre-Aton-loving selves3?

I had an epilogue of my own: from the side of the Dress Circle there is an exit that spits you out right into the street in 2min flat. I don’t remember ever getting out of a theatre so quickly before. You walk into a sort of loading bay which doubles as homeless shelter by night.

Go and see it if you can, perhaps in Los Angeles, since it’s done in colaboration with LA Opera.

← Lava fizzy or the misheard lyrics of Akhnaten
Ariodante in the swamp (London Handel Fest, 12 March 2016) →