The demure ROH audiences haven’t seen Idomeneo since November 1989. And then they got this one. Haha. Judging by their reaction, they didn’t expect anything like this on their turf. But thank goodness we occasionally get interesting productions around here. 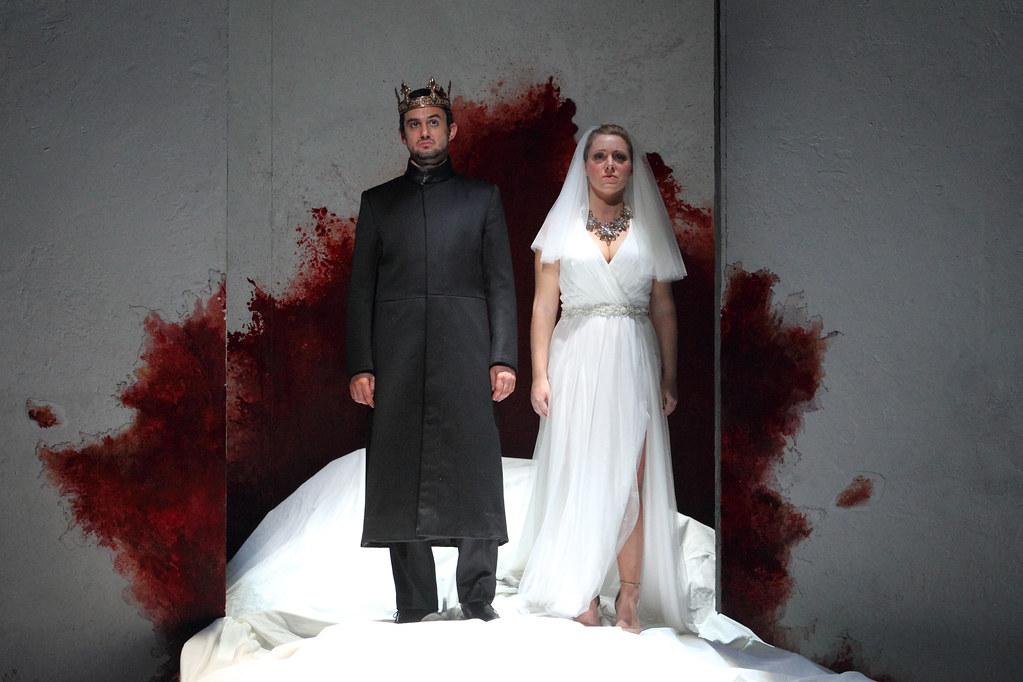 Mozart at 25: makes me think of a young Andy Murray. Here’s a chap who’s obviously talented and has interesting ideas. Yet he hasn’t learned how to end a match in three sets. Wait a sec, dehggi, you’ll say, Idomeneo has three acts! Yes, but do they go on and on or what? Like Murray, Mozart defeats himself here. There are many great ideas but the whole fails to pack as big a punch as it could had young Wolfie edited himself. In his defence, Idomeneo straddles the uneasy ground between Baroque opera seria and Classical opera seria. It struck me in the middle of Fuor del mar: a bravura aria about – what else – a storm at sea! What about D’Oreste, d’Ajace? – furies, serpents. Throwbacks from an older, more formalist age. The humanity of this opera lies in its choruses.

Minkowski: does as much as he can to keep it brisk and interesting, even jaunty (if you can imagine Idomeneo as such). He especially succeeds with the wonderful choruses of which there are plenty. I was about to say I liked Jacobs’ take on Nettuno s’onori when – seemingly out of nowhere – he pulled a marvelous interplay between the male and female voices. Throughout the night his attention to detail brought out Mozart’s brilliant inventiveness and the many layers this work has. He was exceptionally supportive of his singers.

The singing: the unquestionable star of the evening was Polenzani. The man knows how to command a stage, especially in the powerful scene where he reveals to the angry mob that Idamante is the innocent victim of Neptune’s anger. His Fuor del mar was good, though not as good as Richard Croft’s. His voice was solid throughout. Though he wasn’t the most fatherly Idomeneo, he definitely embodied the strong but just ruler.

Franco sang well but seemed terribly tense for most of the night. I couldn’t understand a word he said until after the intermission. Now, like I said before, lack of diction is hardly a great crime against my taste. It did feel like it was due to nerves and I kept wanting him to relax. Idamante is hard done by and, as such, not the most interesting character. Also, his arias aren’t all that. The best thing he sings all night is his and Ilia’s smallish duet S’io non moro a questi accenti, with its gorgeous vocal arabesques. It came out beautiful, with Franco and Sophie Bevan mixing optimally. As usual, Kušej has the lovers in the opera act like lovers from the get-go and these two had as much time to smooch and look cute together as this opera can allow. However, I think I prefer a mezzo Idamante. Mozart seems to need a bit more heft in the voice, especially in Non ho colpa. The role doesn’t call for his lovely chest notes and as such he’s not in a position to show all he can. Opera buddy was a lot less kind than me but – allowing for this nerve-stricken moment – I’m going to give Franco another chance to prove me wrong in a couple weeks’ time. Sophie Bevan sounded pretty good and looked lovely but I’m not the biggest fan of Ilia’s music, save for the above-mentioned duet.

Malin Byström’s Elettra reminded me of Glyndbourne Rinaldo‘s Armida. She chewed scenery all right but I was a tad underwhelmed by her D’Oreste, d’Ajace. Judging by how loud she can project I’d expected more body to her hahahas. Maybe those expectations were wrong. But I guess I can be excused for having had them having seen her loud’n’dirty Donna Anna earlier this year.

This version kept Arbace’s very long and boring aria. Nothing against Stanislas de Barbeyrac, he was fine, but was stuck with that uninteresting (to me) bit of music. He was also equipped with an accordion throughout, which I guess makes him a bard. Rob might be happy to hear he undressed to his undershirt during the aria 😉

Kušej: lives! – harsh and uncompromising and spellbinding. He was booed, of course. ROH audiences: still tuned to Classic FM.

Those familiar with this Kušej production

would recognise many of his favourite tools: what I call “tableaux” (like the one pictured, of which there are even more here, as the choir is very active), complex personenregie (complete with lurking/menacing behind the scenes player), boys in underwear (eventually armed), the somewhat dopey, motley dressed chorus, people cowering to safety through smoke, lots of to-and-froing whilst singing, and above all, the starkly bleak ending.

What Kušej does this time is bring the concept of Neptune into contemporaneity. The tableau he did for the pivotal chorus Nettuno s’onori has the motley choir on their knees, forced to worship a ridiculous shark. The idea is that Idamante’s youthful good intentions have been hi-jacked by the High Priest’s armed thugs who have taken advantage of the vacuum of power caused by Idomeneo’s absence. A splinter group led by “The Voice” rescues Idamante at the last moment and deposes Idomeneo. After Idomeneo’s heartfelt speech in which he perfunctorily renounces power in his son’s favour, the motley chorus steps over his dead body on their way to blindly praising the new ruler off stage. The curtain falls and some people start clapping but nope, it’s not the end. Haha. The “curtain” (via a projection) tells us that utopias fade, rebellions decay but people never change. Cue in uncomfortable audiences. The curtain stays down whilst the orchestra plays merrily on. I sniggered. Eventually Kušej takes pity on them and has the curtain back up. The panels spin, revealing more tableaux. The audience is unimpressed.

Idamante and Ilia wed atop a white sheet covering the bloody mess that brought them to power. Idamante already looks uncomfortable but there’s hippies with guns all around them and you don’t mess with hippies with guns. There is more spinning of panels – like in his Don Giovanni – a lot of ideas thrown at you but you could guess that. I doubt I’m going to come anywhere near figuring it all out tonight, though this production is a lot more transparent than his Tito. But you can see there are a lot of parallels between the two – the lonely ruler, the illusion of power, the entrapping ominous outside forces…

…maybe even more than ideas, I’m left with a lot of unusual feelings.